But also, a lot of those are filled with violence, shooting, bombs, and people doesn´t really seem to think it´s a problem. But what happens when it becomes reality!?

Or more, what happens when reality takes over the video game?

In an effort to raise awareness of the situation of children in South Sudan, UNICEF embarked on an unusual kind of campaign.

They sent an actor, a film crew and two South Sudanese youth to a major video game convention in Washington, D.C., and we were given a keynote address slot to pitch an exciting new video game to an audience of gaming enthusiasts.

The gamers in the room were real, as were their reactions and the footage that UNICEF captured for this short film.

In 2014, disasters and crises have affected children in many parts of the world. In South Sudan, which only a few years ago celebrated its independence, food crisis and conflict during the past year have had deadly consequences for children.

Raising awareness is just one step toward helping the children of South Sudan, who are living every day in a life-or-death situation, and it is not a game.

Read more about the situation in South Sudan.

Coca-Cola finds a creative way to connect the people of India and Pakistan.

The warriors of Nukunonu, Tokelau show that they are fighting climate change. They’re not about to give up.

Today, the world had the opportunity to watch and get inspired by warriors from all over the Pacific Islands that got together to fight Climate Change!

While world leaders are talking, and selling out to corporate interests, the Pacific Islanders are watching the water wash their ancestors land away… and they had enough!

They are not drowning without fighting! And the message was clear, and coming from all islands of the Pacific today! (Check some photo highlights of the Day of Action here!)

And it’s super exciting to see that warriors from around the world are coming together and speaking up in solidarity with our Pacific Islanders! Want to know who are the warriors jumping into this fight!?

Check out: http://350dotorg.tumblr.com/ And meet the common people, that just like our warriors had enough.. and decided to take on this fight against climate change!

Obviously, I’m also in this fight alongside with the Pacific Warriors!

Fighting alongside #Pacific Warriors against Climate Change.. all the way from Brazil!

What about you? What are you waiting to join us in this fight?!

If you know me, you probably know I go on and on about the role young people play (or should play) in deciding their own lives. While many agree we need to empower our youth, very little are ready to create the space and the opportunity for young people to take ownership over different aspects of their own lives.

In many previous posts, I’ve talked about youth-led development.. which is the idea of young people becoming equal partners in development processes that will shape their communities and consequently their lives…

But today I want to bring a question about youth-led education… Have you thought about what could happen if students would design their own schools!?

Sounds weird!? Maybe you should have a look at this!

“Education is not the filling of a pail, it’s the lightening of a fire!”

If you want to learn more about the project, and engage with other people trying to re-think education, make sure you connect at https://www.facebook.com/groups/independentproject/

[EN] “Only when you are hungry, you understand hunger!”

Food Bank Foundation knows that the best way to someone’s heart is through his/her stomach so they partner with 2 of the most important pizza places in Asunción, Paraguay and decided to innovate with this campaign to raise awareness about the fact that many people and specially children go to bed hungry everyday.

When the pizza was delivered much later than expected on that Friday night, clients found the message: when you’re hungry, you understand hunger. This pizza is free so you can contribute what you can to help the national food campaign.

Well done Food Bank Foundation for the creativity and the inspiration!!!

(worth checking also another great example of creativity applied for a good cause: https://joaofelipescarpelini.com/2012/04/13/organdonation/)

It’s almost Car-Free Day.. and lots of different things are happening around the city..

But particularly to celebrate this mobility week.. I came across this super sexify video promoting public transportation in Sweden!!! (make sure you watch with the english subtitles!)

Obviously this makes a clear point, that awareness raising can (and must!) be fun, engaging and sexy, as much as it is to change the world! 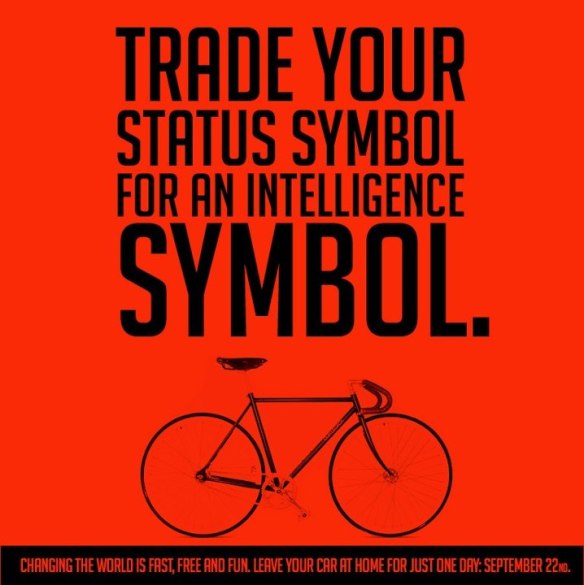 [EN] I'm a full-time dreamer and activist! I engage with passionate and creative people to create tools, opportunities and capacity that empower individuals and their communities to be the change they want to see in the world!